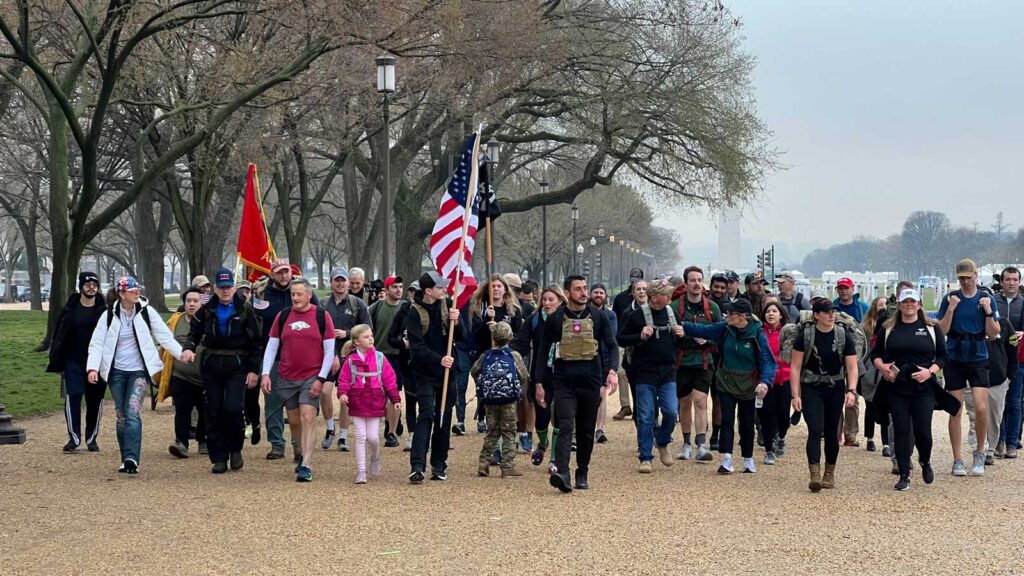 “I could not think of a better way to celebrate the outstanding progress the Foundation and all our supporters have made over the past year. We were fortunate to have so many people join us on the National Mall, whose presence reaffirmed that Americans of all backgrounds and political persuasions firmly support a Global War on Terrorism Memorial in the Reserve area of the National Mall”

“The Foundation was honored to convene this celebratory event alongside legislative allies from both parties, our partners in the federal government, and members of the veteran and Gold Star communities for whom this Memorial will be a critical place of honor, healing, empowerment, and unity. We will keep striving together until our goal is accomplished and the Memorial is built.”

The Ruck kicked off on the front steps of the Lincoln Memorial and made its way past other national war memorials on the National Mall for a total distance of nearly three miles. Participants in the ruck carried various flags behind an American flag which was once flown at the U.S. embassy in Somalia. “Keeping the American flag at the head of the ruck conveyed that the diverse supporters of our mission are ultimately united behind the goal of honoring all who have served and sacrificed in the Global War on Terrorism, whether in a uniformed or non-uniformed role,” said Rodriguez.

“I was honored to take part in the inaugural Ruck the Reserve event, and to join alongside veterans, advocates, and Gold Star families in proudly saying that the Global War on Terrorism Memorial will soon become a reality on the National Mall in Washington, D.C.—where it belongs,” said Senator Joni Ernst (R-IA) a veteran of the Global War on Terrorism and a co-sponsor of the GWOT Memorial Location Act. “Last December, after a years-long, hard-fought effort, I was proud to get my bipartisan measure with Senator Maggie Hassan to build the Global War on Terrorism Memorial across the finish line to honor the heroes who served in our nation’s longest war for generations to come, and I cannot wait to see it come together.”

“There is no better place to honor the service and sacrifice of GWOT veterans than the National Mall,” said Rep. Mike Gallagher (R-WI), also a Global War on Terrorism veteran and co-sponsor of the GWOT Memorial Location Act. “Getting this authorization across the finish line took years, but thanks to the hard work of my colleagues and the GWOT Foundation, it’s close to becoming a reality. The ruck was an incredible way to come together and celebrate this important milestone.”
Rep. Jason Crow, a GWOT veteran and co-sponsor of the GWOT Memorial Location Act, said “As a veteran, I know the healing power of place. After a long road fighting for this memorial on the National Mall along with Rep. Gallagher and Senators Ernst and Hassan, I’m grateful to celebrate the permanent tribute we’re building for those who served in the Global War on Terror. This monument will go a long way in honoring the service and sacrifice of our troops and I’m honored to have been a part of making it happen.”