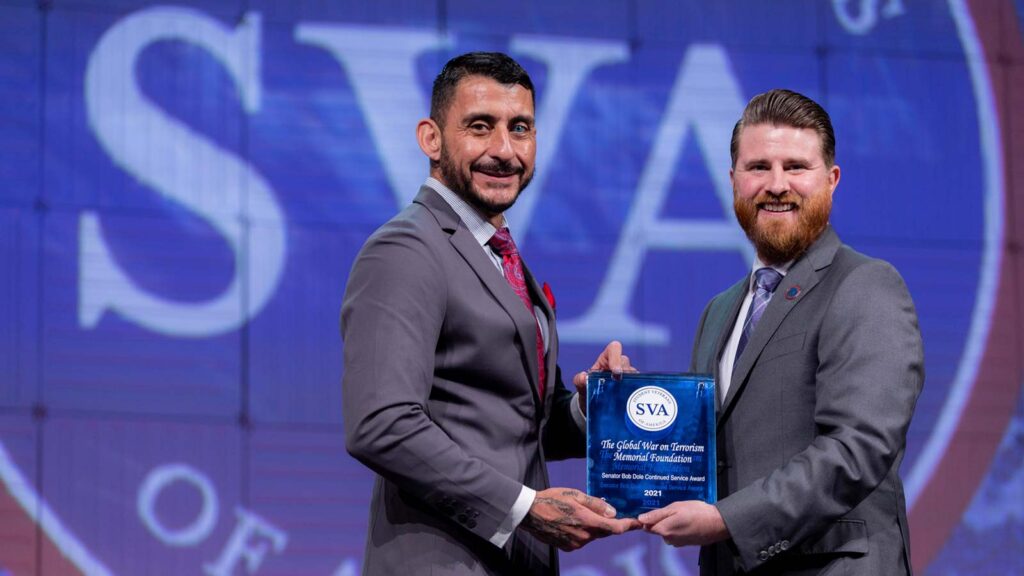 The award, named after the late Senator Bob Dole, honors the group’s efforts to build a new memorial on the National Mall for Post-9/11 veterans.

The inaugural Award was presented to the Foundation for its achievements in advocating for a memorial for Post-9/11 veterans on the National Mall. President Joe Biden signed the Global War on Terrorism Memorial Location Act into law last year, authorizing its construction.

“Considering Senator Dole’s nearly decade-long mission to build the National World War II Memorial, we could not think of a more deserving organization for the first recipient of this honor, and we look forward to seeing the Global War on Terrorism Memorial become a reality.”

“I am honored to accept this award on behalf of the Foundation and our supporters,” said Global War on Terrorism Memorial Foundation CEO and President Michael “Rod” Rodriguez. “Senator Bob Dole was a great American whose spirit of public service lives on within SVA and all of America’s veterans and their families. Our Foundation is proud to pursue our mission of building a Memorial to honor our veterans in close partnership with SVA and many other veteran service organizations.”

In honor of Senator Dole, SVA will continue to recognize an organization or individual annually for service and advocacy in support of our Nation’s veterans, military families, caregivers, and supporters.

About Student Veterans of America

With a mission focused on empowering student veterans, SVA is committed to providing an educational experience that goes beyond the classroom. Through a dedicated network of more than 1,500 on-campus chapters in all 50 states and three countries overseas representing more than 750,000 student veterans, SVA aims to inspire yesterday’s warriors by connecting student veterans and military-affiliated students with a community of dedicated chapter leaders. Every day these passionate leaders work to provide the necessary resources, network support, and advocacy to ensure student veterans can effectively connect, expand their skills, and ultimately achieve their greatest potential. For more information, visit us at www.studentveterans.org.