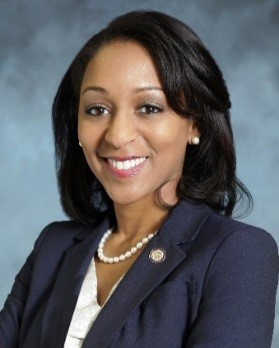 Today the Global War on Terrorism Memorial Foundation announced that Erica Jeffries Purdo will join the Foundation as a member of the Board of Advisors. Jeffries Purdo is the North America Pharmacy Leader for the Strategic Customer Group in the Janssen Pharmaceutical Companies of Johnson & Johnson. Her role at Johnson & Johnson builds on a successful career in both the public and private sectors, including her service as a U.S. Army Officer and the Director of the Illinois Department of Veterans’ Affairs, where she was responsible for over 1,200 employees serving nearly 700,000 veterans and their families.

“Veterans and their families have made profound sacrifices for our security and freedom over more than two decades in the Global War on Terrorism,” continued Jeffries Purdo. “The Memorial will be instrumental in causing Americans to remember and reflect on their acts of courage, and in helping those bearing the burdens of warfare to heal.”

“Erica’s passion for veterans and their families, her military service, and her outstanding record of accomplishment at every stage of her career makes her a welcome asset for the Foundation team,” said Foundation President and CEO Michael “Rod” Rodriguez. “She will represent the Foundation brilliantly and be an important source of strategic thinking and leadership as we take steps toward the completion of a GWOT Memorial.”