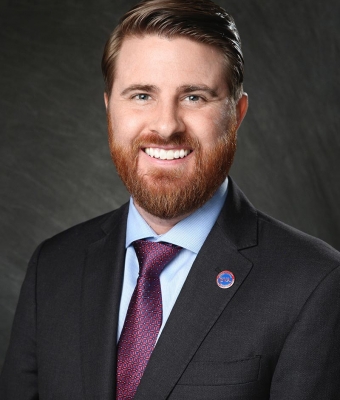 Jared Lyon was appointed National President & CEO of Student Veterans of America (SVA) in 2016. He leads the organization’s efforts to empower student veterans using the transformative power of higher education. Since he took office, Lyon has overseen SVA’s growth to a network of more than 1,500 chapters on campuses in all 50 states and three countries representing over 750,000 student veterans.

During his tenure, he co-authored the National Veteran Education Success Tracker (NVEST), a comprehensive study of the first 854,000 student veterans to use the Post-9/11 GI Bill. In 2017 Lyon led SVA’s commitment to pass the “Forever GI Bill,” the largest expansion of college aid for military veterans in a decade with an economic impact of $3.4 Billion. A veteran of the U.S. Navy, he served as a submariner and diver, taking part in multiple deployments in support of the Global War on Terrorism.

Prior to joining the headquarters team at SVA, Lyon previously served as the National Program Manager for the Institute for Veterans and Military Families Entrepreneurship Bootcamp for Veterans and as Manager of Florida Operations for the Washington Nationals Major League Baseball team. Lyon is a member of the U.S. Department of Veterans Affairs Veteran’s Advisory Committee on Education, and a commissioner for the American Council on Education’s Commission for Education Attainment. He also serves on the Florida State University Veteran Advisory Board and is a 2018 Presidential Leadership Scholar.

He holds an Associate of Arts from Eastern Florida State College, a Bachelor of Science from Florida State University, and a Master of Public Administration from the Maxwell School of Citizenship and Public Affairs at Syracuse University, where he is an adjunct professor at the Whitman School of Management. In 2011, SVA named Lyon the National Student Veteran of the Year. Jared and his wife Chayla reside in Alexandria, Virginia with their son, Campbell.