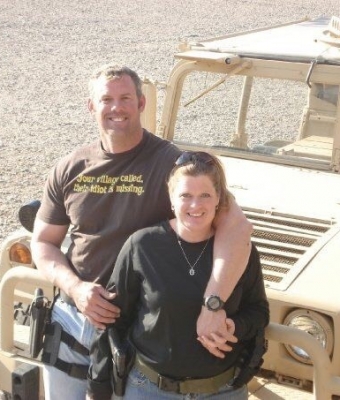 Upon her marriage to Michael Duskin in 1993, Maggie Duskin became an Army wife, and the Matriarch of a multi-generational Army family. Her journey with the army began when the family was stationed at Fort  Benning, GA. Michael was assigned to 3rd Battalion 75th Ranger Regiment. After a brief return to civilian life and then a stint with the National Guard, the family decided to return to Army life. Returning to Active Duty meant establishing a new home at Fort Bragg, North Carolina.

Maggie and Michael settled into their new life. Maggie stayed at home raising three children, pursued her education and supported Michael through his new assignment with the 3rd Special Forces Group and multiple deployments.

In October of 2012, CWO2 Micheal S. Duskin was killed in action while serving his seventh deployment. The course of Maggie’s life changed forever at that moment.

Over the past six years, Maggie has dedicated her time to helping Gold Star Families in the Special Operations Forces (SOF) Community cope with their loss. As a Gold Star Family liaison, she is committed to helping others through the healing process and memorializing the lives of other fallen heroes. Maggie didn’t realize it at the time, but she was also learning first-hand what a military family really needs during this difficult time.

Never a woman who pursued the limelight, Maggie soon found herself in the role of Executive Director of the Duskin and Stephens Foundation, an organization established to honor her husband’s legacy and sacrifice. The Foundation provides direct support to families of fallen operators, healing programs designed to combat the effects of post-traumatic stress, traumatic brain injury and loss of a loved one, as well as education grants for the children of fallen soldiers.

Maggie continues to find the strength within to raise her three children, with the two oldest boys both serving as active duty soldiers.