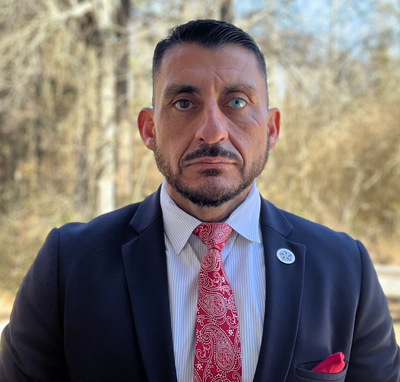 Michael “Rod” Rodriguez is the President and CEO of the Global War on Terrorism Memorial Foundation. Rod joined the U.S. Army in 1992 and attended the Special Forces Assessment and Selection course to become a Green Beret in 1997. In 2013, he was medically retired due to numerous combat injuries. His last assignment as a Green Beret came as a Sniper Instructor assigned to the JFK Special Warfare Center (Range 37) at Fort Bragg, North Carolina. He has deployed ten times in service to our nation.

Rod’s involvement with the GWOT Memorial Foundation began in 2016 when he joined the organization as a board member in support of the Foundation’s sole mission to construct a Memorial on the National Mall that appropriately honors the profound service and sacrifices of all who served in America’s longest war. Rod later led the organization as President and CEO from March 2018 to September 2020 before taking a leave of absence for a personal matter and overseas deployment. He was re-appointed President and CEO in December 2021.

From 2015-2018, Rod served as a member of President George W. Bush’s Military Service Initiative Advisory Council, advising, and supporting the President and leadership of the Bush Institute on strategies and programs to support veterans and their families. In 2013, Rod was appointed as a Fellow of the Manhattan-based Explorers Club, an international organization dedicated to the advancement of scientific exploration and inquiry, for his research on traumatic brain injuries and post-traumatic stress.

In August of 2021, Rod directly assisted in evacuating U.S. allied personnel and their families from Afghanistan, and he continues to provide support for their resettlement. He helps several other non-profits in both veteran and non-veteran spaces. He also provides leadership advice and training to local, state, and national government agencies, corporations, and private businesses. Rod holds a B.S. in Strategic Studies and Defense Analysis and an M.A. in Diplomacy with a concentration in International Conflict Management, both from Norwich University.

As an artist who works with metal, Rod is a passionate advocate for the power of art to heal, connect, and inspire us all. In addition to being part of several private collections including the British Royal Family, his work has been exhibited at the George W. Bush Presidential Center in Dallas, Texas and the Kennedy Center in Washington, D.C. Rod also works with the National Endowment for the Arts Creative Forces initiative.

Rod is a New Mexico native who comes from a family with a strong tradition of military service. Both his grandfathers served during World War II, and his father is a Vietnam veteran. His eldest son is currently serving with the 82nd Airborne Division and has deployed twice, one of which was to the same regions of Afghanistan as Rod. Rod is a committed outspoken advocate for veterans and their families and often speaks publicly on the need to increase understanding of life experiences between the civilian and military communities. Most importantly, Rod is a proud grandfather, father, and hermano to many.