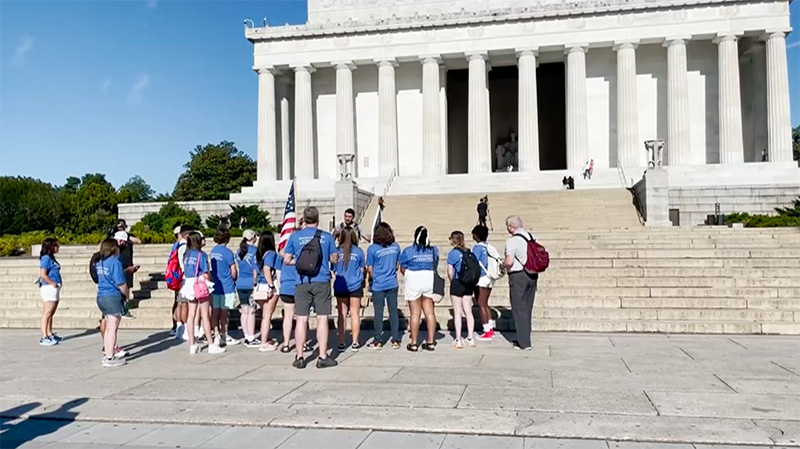 Article by By Peter Zampa | Link to full article on graydc.com

Gold star students are in Washington, D.C. this week seeing the sights and paying tribute to their parents who died serving the country.

“Losing someone especially close to you – it’s really a lot harder than most people can anticipate,” said Kiki Patterson, a Gold Star daughter studying at Columbus State University.

Kiki reminisced about her father who was killed by a car bomb in Baghdad in 2004. Army Staff Sergeant Esau Patterson was sweeping for improvised-explosive devices when he and seven others were killed. Kiki is one of 12 Gold Star students who traveled to Washington with the Freedom Alliance, a military non-profit.

“When you become a Gold Star child, it’s a bigger feeling than you would ever imagine,” said Patterson.

Kiki is carrying on her father’s legacy after receiving a scholarship from the organization. She is enrolled in the Reserved Officers’ Training Corps at Columbus State while studying cybersecurity. Kiki plans to commission as a second lieutenant when she graduates in 2024.

The self-proclaimed military brat is honored to walk the National Mall where a Global War on Terrorism memorial will eventually stand to honor her father and the thousands who also died in the war.

The Global War on Terrorism Foundation put on the ruck walk to show the Gold Star students possible locations for the future memorial. It was the third ruck walk they put on this year.

“This is a fantastic opportunity for us to share our mission with them but also I’m really excited to hear what they have to say as we tour the reserve,” said Michael Rodriguez. president and CEO of the Global War on Terrorism Memorial Foundation.

The former Green Beret said he hopes to have a location for the memorial set on the National Mall by the end of this year. Congress authorized construction of the memorial in the reserve portion of the mall last December. Rodriguez is eager to start building, so visitors can honor those lost in this war.

“It’s a great opportunity for us to tell the stories, the millions of stories, in this multigenerational conflict,” said Rodriguez.

Rodriguez says the foundation will continue holding these ruck walks as they move closer to construction of the memorial.