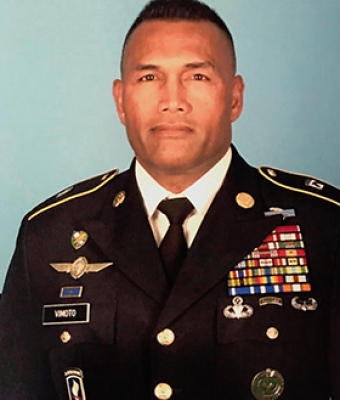 Today the Global War on Terrorism Memorial Foundation announced that U.S. Army Command Sergeant Major Isaia Vimoto (Ret.) who has served on its Board of Advisors for four years, has been appointed to the Foundation’s Board of Directors. In addition to serving thirty-four years in the U.S. Army, Vimoto is also a Gold Star and Blue Star father. Four of his children have deployed to Afghanistan, and one also deployed to Kuwait. One is still currently serving in the U.S. Army.

“America must remember the bravery, commitment, selfless service, and patriotism of two generations of warfighters. My children served in this war just as I did. We must also give America’s military families a place to remember and heal. By constructing a Memorial on the National Mall, we will ensure that those who made the ultimate sacrifice will not be forgotten. I am proud to continue on this mission as a Board Member, and I look forward to continuing to work with all of our supporters to see our goal come to fruition”

“Isaia’s continued leadership and enduring passion for honoring all who have served and sacrificed in the Global War on Terrorism is a tremendous asset to the Foundation and its mission,” said Foundation President and CEO Michael “Rod” Rodriguez. “His profound leadership skills, honed in the course of more than three decades in the Army, are invaluable to creating a place of honor, healing, empowerment, and unity for Gold Star families, veterans, their families, and all Americans.”

“Our Board of Directors has complete confidence that Isaia will be a powerful addition to our team,” said Board Chairman Ted Skokos. “As the Foundation continues to expand its efforts, Isaia will serve as a valuable source of wisdom and leadership for our organization. On behalf of the entire Board of Directors, we are looking forward to continuing to work beside him to pay a proper tribute to those who have answered the call of duty in America’s longest war.”

Originally from American Samoa, Isaia Vimoto first entered the Army under the COHORT program in 1981. Vimoto rose to the rank of Command Sergeant Major (CSM) before retiring in 2016. CSM Vimoto completed one tour of duty in Iraq and four in Afghanistan. In 2007, Vimoto and his son, Private First Class Timothy Vimoto, deployed together with the 173rd Airborne Brigade. On June 5th, 2007, Pfc. Vimoto was killed in action during a firefight in the Korangal Valley region of Afghanistan.
For Isaia Vimoto’s official photograph and full bio, visit the Global War on Terrorism Memorial Foundation team page.